My Collection of Vintage Firearms 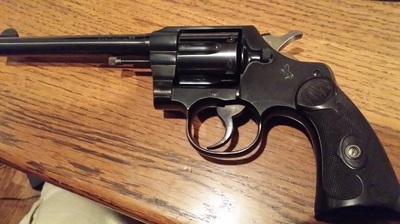 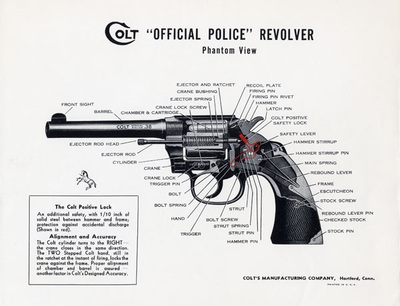 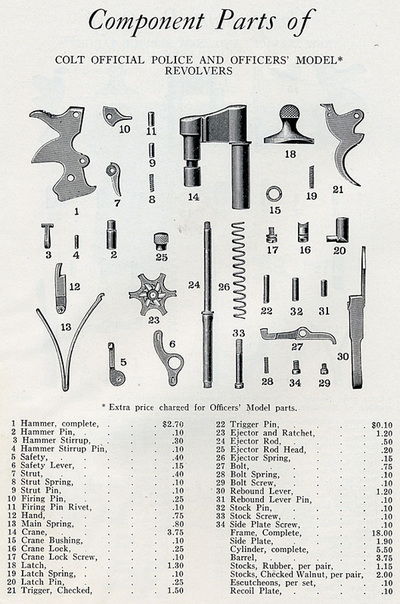 As the 20th Century began, the older .32 caliber revolvers which had been standard-issue for the majority of American police departments began to be phased out in favor of the larger-bore .38 caliber. In 1908 Colt introduced a sleek and modernized revolver they dubbed the Army Special, which in the powerful (for the time) and popular .38 Special quickly became the issue service revolver of many departments.

During the same period, revolvers began to fall out of favor with the U.S. Military, especially after the adoption on theU.S. Model of 1911 semi-automatic pistol.As military sales of their revolvers dropped off, Colt searched for an alternative market and realized the popularity and strong sales of their product line with civilian law enforcement agencies could form their replacement market.

By 1927 the overwhelming sales of two popular models, the Army Special and Colt Police Positive, had assured Colt’s dominance of the law enforcement firearms market.[1][2] Colt’smarketing strategy was further fine-tuned by making a few superficial alterations to the Army Special revolver and then renaming it as the “Official Police” model.[1][2] The changes included adding checkering to the trigger and cylinder latch, matting the topstrap of the frame and widening the rear sight groove. Colt also upgraded the quality of the gun’s finish from a dull blued finish to a highly polished blued surface.[1][3] In 1930, Colt scored a marketing coup when they publicized that their Official Police model could easily handle the firing of heavily-loaded .38 rounds intended for competitor Smith & Wesson's new large N-frame revolver, the .38-44, none of the comparable S&W revolvers could manage this feat.[1][2]By 1933 the Colt sales catalog listed many law enforcement agencies as having adopted the OP as a sidearm, including the New York City, Los Angeles, Chicago, and Kansas City police departments. In addition many state police organizations and even the Federal Bureau of Investigation chose the OP as their issue revolver.[1] The U.S. Army also bought some of the revolvers, issuing them to military police and to federal agencies in need of a revolver for their armed agents, such as the Treasury Department, Coast Guard, and thePostal Inspection Service. Many Official Police revolvers were also bought by the police forces and militaries of various South American countries.[1][3]

Between May 1940 and June 1941, 49,764 Official Police revolvers in .38 New Police or .38/200 caliber were purchased by the British Purchasing Commission and shipped to the United Kingdom for use by British and Commonwealth armed forces as a substitute standard sidearm. These revolvers bore British military acceptance markings and had a 5" barrel; the butt was fitted with a military-style lanyard ring. Most of these OP revolvers were assembled from commercial-grade parts made before 1942.[4]

When the U.S. became involved in World War II, the U.S. government requested contracts to supply .38 revolvers required for arming security personnel charged with the security of government buildings, shipyards, and defense plant installations against sabotage or theft. Commencing in 1941, small quantities of the .38 Colt Official Police were procured directly from the Defense Supplies Corporation (DSC). When government purchasing officials objected to production delays of the OP, as well as the unit cost, Colt responded by simplifying the gun. Savings were achieved by eliminating all unnecessary exterior polishing operations, substituting a smooth-face trigger and hammer, and fitting the gun with simplified checkered wood grips with the Colt medallion; the latter was soon replaced by 'Coltwood' molded plastic grips. Instead of the normal bluing, the revolver was given a dull parkerized finish. Dubbed the Colt Commando, the weapon was primarily used to arm units of Military police, security guards at U.S. defense plant installations and shipyards, as well as limited clandestine issue to agencies involved in overseas espionage and military intelligence.[1][2][5]

In mid-1942 the Springfield Ordnance District (SOD) was given control over procurement and distribution of the Commando, which transferred the revolvers to the end user. A few Commandos were shipped to the U.S. Maritime Commission and used as small arms equipment on U.S. merchant ships and ships provided to the Allies under Lend-Lease.[6] Most Commando wartime production went to the Defense Supplies Corporation (DSC).[7] for use by security and police forces, while approximately 1,800 Commandos were used by the U.S. Navy, with another 12,800 revolvers distributed to various military intelligence agencies. Control over procurement changed in 1944, after the DSC formally objected to being charged additional handling fees by the armed forces, and was then authorized to procure the Commando directly from Colt.[7]

After the Allied victory, Colt resumed commercial production and returned to the prewar polished blued finish, but retained the plastic grips which they labeled “Coltwood” until 1954 when the checkered wooden grips were reintroduced.[1] During the postwar period, Colt fell on difficult financial times and the company introduced few new models. At Smith & Wesson, both output and new model civilian and police sales improved, and the sales margin gap between the two corporations progressively tightened. Finally in the 1960s S&W took over the lead.[1][2] A contributing factor to this change may have been Smith & Wesson's generally lower cost per unit, accompanied by a double-action trigger pull on their military & police model that was preferred by many agencies teaching the new combat-oriented double-action revolver training.[1][2] Colt announced the discontinuation of the Official Police in 1969, stating that competitive production of the design was no longer economically feasible.[1][2] With a total production of over 400,000 pistols, the Official Police ranks as one of the most successful handguns ever made.[1]

Features[edit]The Official Police was machined of fine carbon steel, with bright royal Colt blued as well as nickel plated finishes, and was offered in 4, 5 and 6 inches (100, 130 and 150 mm) barrels. Built on Colt’s .41 or “I” frame, it was manufactured in a variety of chamberings including .22 LR, .32-20 (discontinued in 1942), .41 Long Colt (discontinued in 1938), and the most common and popular, the .38 Special.[1][2] Colt’s “Positive Lock” firing pin block safety was a standard feature of the revolver, preventing the firing pin from striking the primer unless the trigger was deliberately pulled.[1] The pistol’s sights consisted of a blade front with a fixed iron open rear sight, which was a simple V-notch shaped groove milled into the revolver’s top strap. The top strap had a matte finish to reduce glare down the sight plane.[1][2]